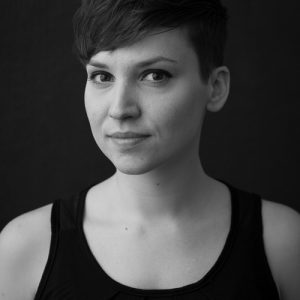 Kristin Mente is an independent dancer and choreographer and studied stage dance at the Palucca University of Dance in Dresden (Palucca Hochschule für Tanz), which she finished in 2007. In the same year, she received the Palucca Scholarship for outstanding achievements.
From 2007 until 2012, she danced at the Tanztheater Bielefeld under direction of Gregor Zöllig. There she worked with different guest choreographers, like André Gingras, Simone Sandroni and Guilherme Botelho.
Since 2012, Kristin Mente is working as an independent dancer and choreographer. She came back to Dresden in 2015. She dances in projects with different artists and companies, like the guts company, M.over Company and John Moran. Besides that, she works as a guest dances at the Semperoper Dresden in different operas. For the projects ‘Linie 8’ and ‘kurz und gut’ she created multiple short pieces, like ’hunted’, ‘Gedankenkarussel’ and ‘neu ordnen’. Since 2016, she is active in the TanzNetzDresden.
2020 LAND WITHOUT WORDS